Your position： Home » Industry News » What is the difference between audio cable and audio cable?

The audio cable, also known as the speaker cable, is mainly used to connect the power amplifier, the main speaker and the surround speaker in the home theater, that is, to connect the power amplifier and the speaker. Compared with video line and audio line, its current signal is relatively large. Because of the large signal amplitude, the audio line often has no shielding layer. For this kind of wire, the key is to reduce its resistance. Because the output resistance of modern power amplifiers is very low, the requirements for speaker wires are also increased, such as selecting large cross-sectional area or multi stranded wires. How to distinguish the audio cable from the audio cable.


The audio line is used to transmit low-level electrical signals, and the voltage is very low.


The audio line is used to transmit power signals, and the voltage is much higher than the level signal.


Audio cable: audio cable for short; A line used to transmit electroacoustic signals or data. Broadly speaking, there are two types of electrical signals and optical signals. The main transmission types of audio and electrical signal cables are balanced and unbalanced. The signals are analog and digital, and the signal strength is different between the front and back stages. 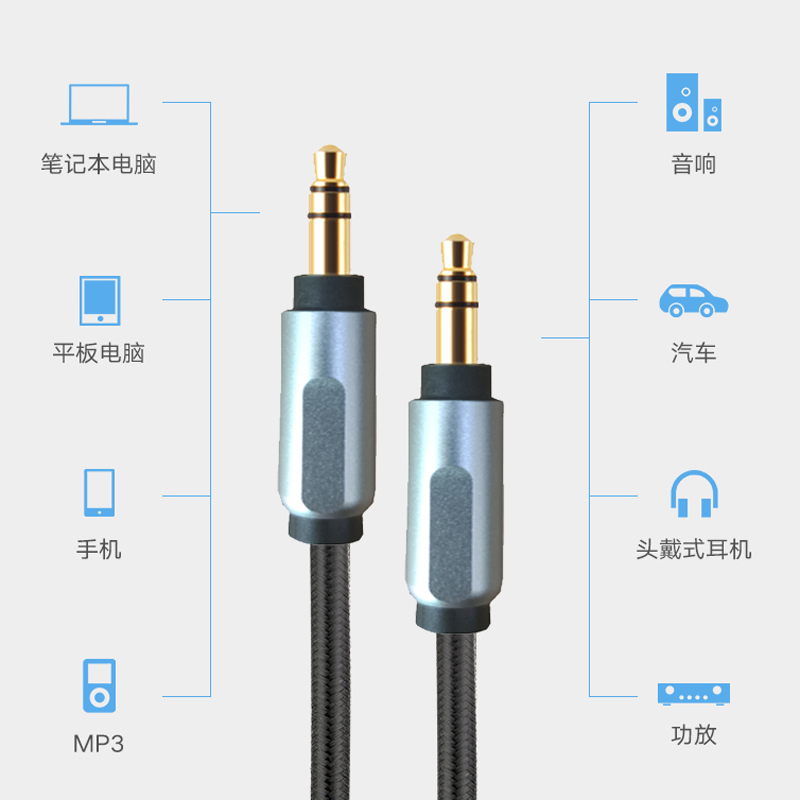 
The audio line directly passes through the power signal. Because the passing current is large, the copper core of the line is usually thick. In order to ensure the high-frequency passage and reduce the resistance attenuation, most of the wires are silver plated, gold plated or oxygen free copper wires. The sound line generally includes copper-plated sound line and oxygen-free copper sound line.


Generally, oxygen free copper is the positive electrode and tin plated copper is the negative electrode. The color of the double-layer outer skin is red, and both sides are copper, oxygen-free copper core. The positive side is marked with a red line. The sound cable is composed of the corresponding number of copper cores. Generally, the more the number of copper cores, the better the effect, and the higher the price. However, if it is a household cable or an ordinary speaker cable, 200 to 300 wires are actually enough.


The audio line is used to transmit electro acoustic signals or data. The signal with small current and small power has high impedance and is easy to be disturbed. Therefore, it is generally shielded and the wire diameter is generally thin. The types of audio cables can be divided into two categories, audio electrical signal cable and audio optical signal cable. Audio electrical signal cable is commonly used in the market. The general specifications are: 3.5mm male to male audio extension cable and 3.5mm male to female audio extension cable


The audio cable mainly transmits power signals, so the speaker cable is required to have excellent conductivity and high-quality transmission capacity. At present, oxygen-free copper acoustic wire, that is, the so-called gold and silver wire, is relatively mainstream and has low resistance. Audio gold and silver wires usually have no shielding layer, because the current signal flowing through them is larger than the audio line and video line, and the signal amplitude is large. The most important thing is to reduce the resistance of the line. The impedance of the power amplifier is very low.


The audio line passes through the signal with small power and small current, and it has high impedance and is easy to be disturbed. Therefore, it is generally a shielded line and the line is relatively thin. The audio line usually has a shielding layer, but the audio line often has no shielding layer. The key is to reduce the resistance. Among the deep blue Avenue audio lines, the more expensive is the oxygen free copper speaker special line, which is mainly characterized by good conductivity and low resistivity.


The audio electrical signal cable can be used to connect the equipment of music output signal of mobile phone, CD player and MP3 to the connecting line between power amplifiers. The speaker cable is mainly used in various types of speakers, PA projects, home theater connections, and public space broadcasting systems.

Next：What kind of mobile phone is the type-C data cable suitable for? Can I charge Huawei? Prev： 100W USB C data charging cable and common plug are easy to rust
Keyword：What is the difference between audio cable and audio cable?